The Economist suggests there are two criterions distinguishing language from dialect: social and political. A language will often be the prestigious, official and written. Dialects are often considered to be the ‘slang’ form of a language, with little written forms and mainly spoken.

Despite these two criteria, many linguists use different criteria to distinguish between language and dialect. Linguists make the distinction by looking at how mutually intelligible a dialect is to a language. With this notion, it is suggested that if language A can hold and conversation with language B and they both understand each other, than they are both speaking a dialect of the same language. If language A doesn’t understand language B at all, than they are both speaking different languages.

Chinese is a language that blurs the lines between language and dialect. While Mandarin and Cantonese are considered the same language – they use the same written characters and writing system – they are mutually unintelligible from each other when used in a conversation. The photo below helps to give an idea of the different types of relationships there are between language and dialect, and why a language or dialect may change over time. 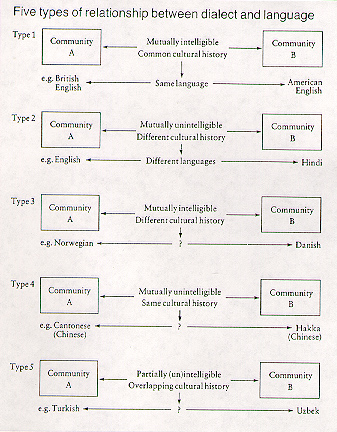