This week we are learning about the Japanese language! According to Ethnologue this language has the ninth largest group of native speakers in the world. There are a total of three countries in the world that speak Japanese as their first language – Japan being the primary country where it is spoken.

Almost 122 million people across the world speak Japanese as their first language. This is approximately 2 per cent of the world’s population. Due to the rugged terrain of Japan many regional dialects have developed over centuries. Some dialects spoken in the Northern regions of Japan are almost unintelligible to other Japanese speakers, but they all use a similar writing system.

This graphic shows the multitude of dialects. Each colour you see is a different dialect. 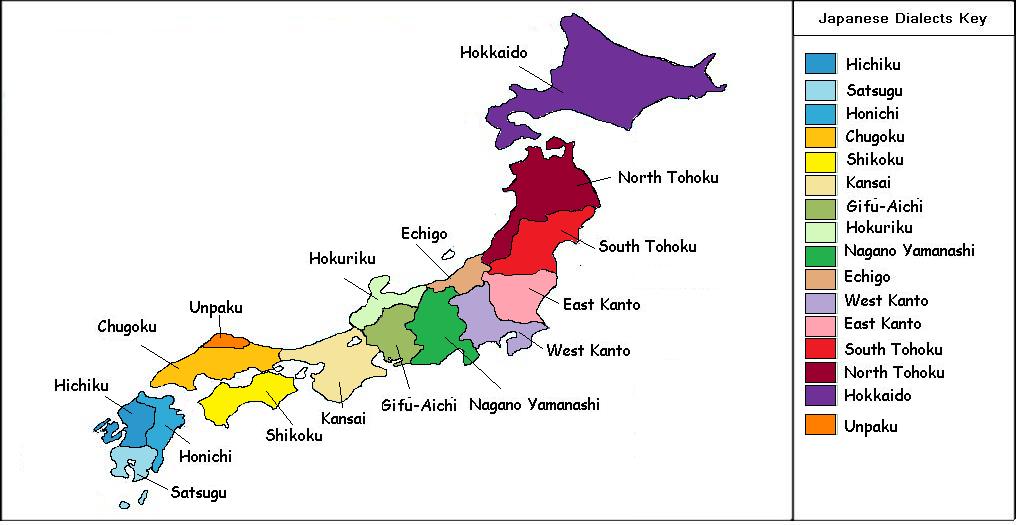 The Japanese writing system makes a large use of Chinese characters (Kanji), however there is no relationship between the two languages. Prior to the use of this language system, Japanese was strictly an oral language. Other writing systems that Japanese uses include Hiragana and Katakana (characters that represent an oral sound), and Romaji (western alphabet used to write Japanese). The language is traditionally written in vertical columns from right to left (Japanese style), but is also commonly used in the Western style of writing (horizontal lines from left to right.)

Japanese is considered a language isolate – a language that does not have any easy genetic connection to another language. Because of this there are many hypotheses of where Japanese originated. Some linguists believe Japanese could be part of the Altaic language group –Turkish and Mongolian languages – while others believe it to be part of the Austronesian language family, which includes Polynesian languages. Since is does not belong to a distinct language group, Japanese has many loanwords from other cultures that have been assimilated into the language. Many of these words are influenced by Chinese and English words.

For English speakers who would like to learn Japanese, it is considered to be on a higher difficulty scale compared to other languages because of its complex writing and oral structures.