In our vast, ever-changing world, it’s hard to believe we could ever lose sight of the latest trends, hottest news, or least of all – an entire language. Believe it or not, language loss happens more often than you’d think.

At the current rate, it is believed a language becomes extinct every two weeks across the globe and over half of the world’s 6700 languages are in danger of becoming extinct by the end of the 21st century. That adds up to 26 extinct languages a year!

What is an Extinct Language?

Where are languages becoming extinct?

Language loss is happening throughout the world. According to an article by discovery.com, there are 88 languages in Canada alone that are endangered, or have already become extinct.  There are many endangered languages across South America, Europe, as well as Asia. An interactive map by National Geographic, which can be found here, points out hotspots across the world where certain languages are most endangered.

Why does this matter?

Many languages have been developed through oral cultures alone and have not been transcribed into written documents. When we lose a language, it has many cultural and social impacts on society. We lose the ability to understand a cultures way of life and their knowledge and understanding of agriculture, math and religion along with their understanding of the region they once lived. Many words they use describe a situation, and cannot be directly translated into one English word. The Public Broadcasting Station (PBS) film The Linguists has a list of one-of-a-kind words that cannot be translated directly. When a language becomes extinct, our entire understanding of a culture does too.

What is being done to prevent language extinction?

Organizations, such as the United Nations Educational, Scientific and Cultural Organization (UNESCO) and Living Tongues Institute for Endangered Languages are attempting to raise awareness of endangered languages as well as document and maintain languages in small communities across the world. By making audio and video recordings as well as detailed linguistic notes, linguists hope to prevent language loss, regardless of whether the language is actively spoken or not. 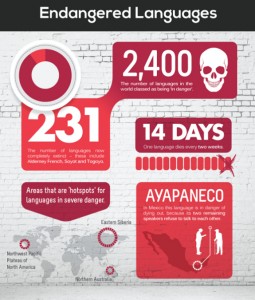 Consider Pendleton Translations for your next large corporate conference.